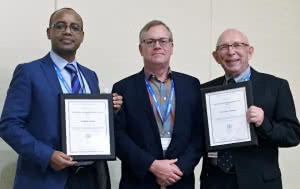 Comments: This article has stood the test of time and makes both a substantive conceptual modeling contribution that can be applied in many different contexts, as well as a useful industry set of measures that continue to be referenced. It is regularly cited (Scopus: 246 times) including 10 new citations already in 2018 (2014-33, 2015-30, 2016-39, 2017-44) and has also been cited in a broad range of outlets; journals of forestry, policy, economics, agricultural economics, resource and environmental economics, operations research, and agricultural science; and prestigious outlets like the Handbook of Research on Strategic Performance Management and Measurement Using Data Envelopment Analysis.

Zhenhua Sun for the thesis: “Differentiating the Effects of Risk-Aversion and Overconfidence among Agricultural Enterprises” supervised by Ying (Jessica) Cao and Alfons Weersink, Department of Food, Agricultural and Resource Economics, University of Guelph

Comments: The thesis is an original and cutting-edge piece of research which has high significance for the field of agricultural economics. The thesis contributes to both the theoretical and empirical literature by disentangling the effects of overconfidence and risk-aversion on businesses. More interestingly, the findings show that overconfidence and risk aversion can have offsetting impacts on market behavior. The findings can be generalized to other contexts of decision-making under uncertainty.

Comments: This is a timely contribution in light of the new round of negotiations over NAFTA and the perceived changes in trade patterns that may follow. The authors conduct a thorough analysis of the current Quebec dairy quota system and provide specific recommendations on how the quota system can be improved to facilitate more efficiency and make the Quebec dairy sector more competitive.

“My favourite thing about being a CAES member is the way it brings together like-minded individuals who all have different knowledge and experience.  To be able to discuss relevant topics with people who have a broad range of expertise within the field is very beneficial.”